The Situation with Steel 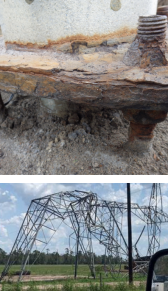 The U.S. transmission and distribution (T&D) system is the world’s largest machine. Paramount to electric distribution, it delivers power from nearly 3,000 power plants and thousands of renewable resources facilities (wind, solar, etc.) to virtually every building and facility in the nation.

Once the envy of the world, America's energy infrastructure is aging and has fallen into decline, earning a C- grade from a leading engineering society.2 Today, the U.S. has more power outages than any other developed country: average utility customers in the U.S. spent more time with their lights out than eight other industrial countries, according to one analysis.

The industry faces a crisis whose source can be summed up in one word: steel.

Steel is just as vulnerable as wood to deterioration from climactic factors, but utilities have wrongly considered steel a perpetual building material. Instead of lasting forever, steel structures need to be maintained. Utilities have been slow to perform the necessary upkeep—let alone upgrade their systems—and that history of poor maintenance is compounding the problem.

Standard steel structure inspection methods also fall short. Utility employees may walk the T&D lines looking for visible issues, while all the time the most concerning problems are hiding under ground, where steel is corroding. Or, the unseen problem may be hanging high above – out of the employee’s view - where insulator attachments or conductor problems can create structural risk.

Outages on the Rise

Traditionally, severe weather events have represented the majority of power outages. That’s being exacerbated, of late, by climate change. Outage hours in the United States rose 73% from in 2020 compared to 2019 according to PowerOutage.US. Moreover, estimates of outage causes and conditions almost certainly do not reflect the true numbers, given the inherent tendency in self-reporting to err on the conservative side.

The surge of wildfires on the West Coast is one of the best examples of the convergence of climate change factors, severe weather, and transmission failures. Indeed, PG&E filed for voluntary Chapter 11 bankruptcy protection in 2019, succumbing to liabilities stemming from wildfires in Northern California in 2017 and 2018. Wildfires and severe weather continue to rise in frequency and intensity, posing a grave threat to steel transmission towers.

America's Grid is at Risk

America’s steel transmission structures are in increasingly poor condition, putting grid resilience at risk. Both transmission and distribution systems in the U.S. are in urgent need of expansion, refurbishment, and upgrading to support increased demand and counteract continued condition decline. While there’s been an uptick in transmission investments, America still faces an estimated $35.4 billion investment gap through 2039, compounded by renewable energy generation needs over the coming decade.

There are direct economic consequences to not addressing the problem: Underinvesting in the grid will lead to inefficiencies in the delivery of electric power that are projected to cause each U.S. household to lose $5,800 in disposable income on average from 2020 to 2039.

Nowhere is the decline in structural resilience more apparent than in the backbone of the T&D system – the millions of steel transmission structures across the U.S.

Once touted as a near-indestructible material requiring little or no maintenance, steel, it turns out, does have weakness: corrosion. Over time, the strength of steel structures diminishes due to corrosion, reducing their reliability and making them more prone to failure.

In addition, the initial protection applied to these structures during fabrication and construction has continued to diminish. Galvanization may age out in less than 30 years below grade, leaving steel vulnerable to corrosion after just 40 years or less in some underground environments.

A major steel industry association claims the average life span of a steel structure is 60 to 80 years. In the U.S., the average age of a steel tower in service is more than 60 years old. Clearly, steel transmission structures are now showing their age.